Press Release & Pics: The Swelling Hunger Wave is On a Huge Curve After Four Weeks of the Work Shutdown 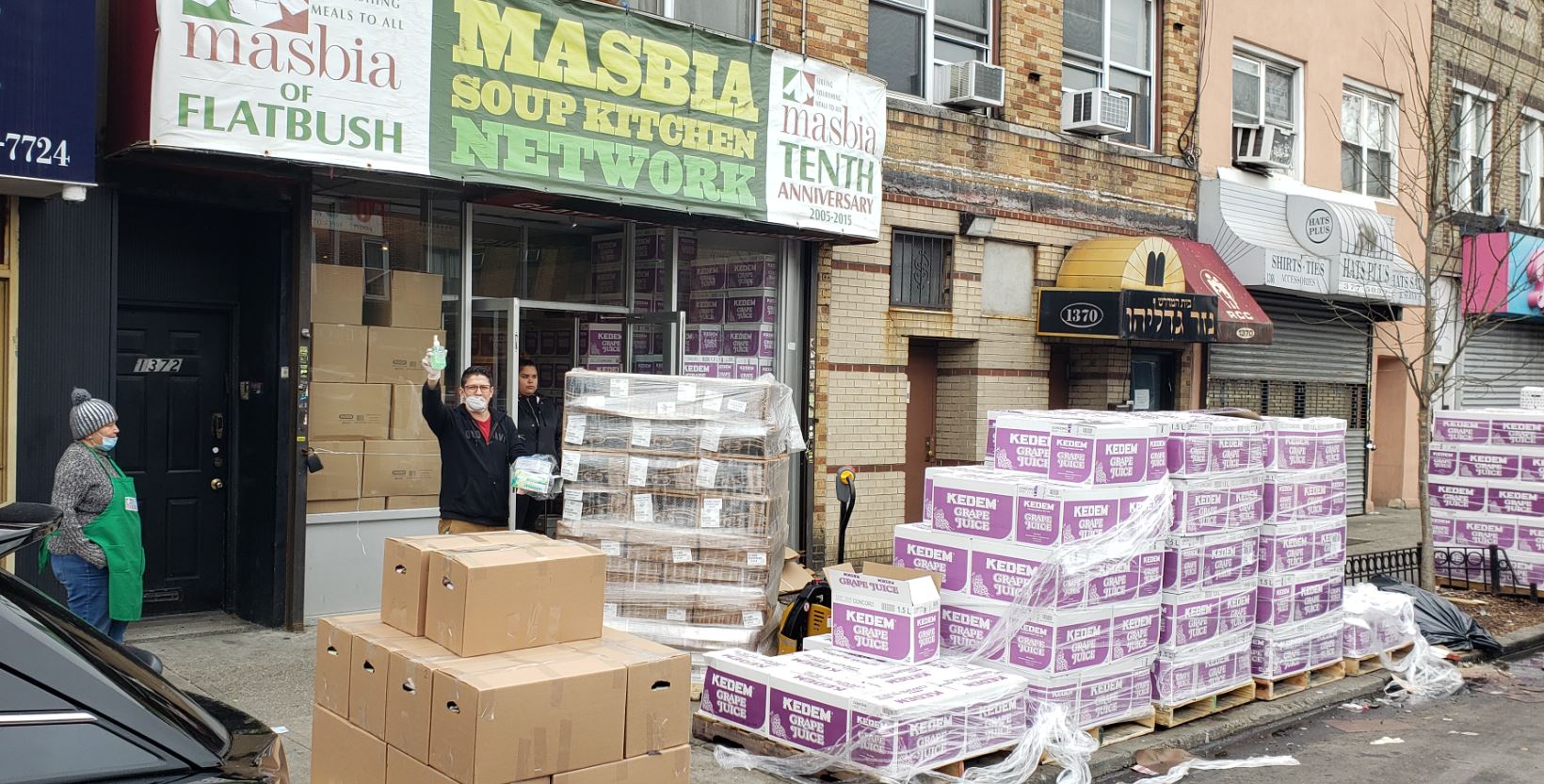 New York, NY -- Masbia Soup Kitchen Network in New York City is bracing for an even greater increase in demand. While demand was accelerating since the outbreak and unprecedented bread lines were forming daily, the hunger wave is about to hit its biggest curve.

People's pantries and refrigerators at home are running empty, widespread hunger is skyrocketing. It is when the masses skip their second bi-weekly paycheck, as a result of the work “pause” going on for four full weeks (since March 22, 8PM). We know that many Americans live a hand to mouth financial lifestyle, with a paycheck away from going bust. So many more cannot withstand four weeks without pay. Since we passed that point, more people are becoming more and more desperate in need of food.

Since the outbreak, about 50% of the people joining the bread lines were new first-time clients at the Masbia Soup Kitchen Network, up from what’s usually about 5%. That’s a 1,000% increase in new clients.

Adding to the demand is that not only are people's finances the cause of hunger, it is combined with food shortages that are increasing costs on many basic food staples and some simply not available. In different ethnic neighborhoods, small groceries, bodegas and convenience stores are simply closed, which means even those who can afford their food, don’t have where to buy it, adding pressure on neighboring supermarkets.

The silver lining here is that all over the city, wherever you go, there are bread lines of masked people forming outside food stores. That normalization is somewhat easing the embarrassment for first time clients to join the charity breadlines, and have their identities masked.

Masbia is announcing added hours of distribution and uniformity throughout the network. All Masbia sites will now be open Sunday through Thursday, 2-7 PM for both soup kitchen and food pantry operations. People can now come and get seven days worth of grocery food for the entire family, or seven cooked dinners, or both. The updated information on Masbia operations can be found at masbia.org/covid19.

In order to keep up with the demand, Masbia is turning to the public to donate generously. It is turning to those Americans who are blessed and are able to be on the giving side to increase their giving and help during this unprecedented time of urgency. In the first four weeks of the outbreak Masbia distributed over one million dollars worth of food. We need your help to keep up with the growing demand by donating at masbia.org/foodemergency

World-Central-Kitchen to set up a Pop-up Free Farmers Market at Masbia of Flatbush every Monday (starting April 20) to help with fresh food resources for Brooklyn's Needy. The NYC Office of Emergency Management (OEM) sent over 1,000 feet of metal barriers to help with social distancing on the breadline in front of the Masbia facilities.

Masbia is the largest network of kosher soup kitchens in America and is projected to double its recent annual meal distribution from over 2 million to close to 5 million. Masbia’s first kitchen opened its doors in April of 2005.

WHAT: The Swelling Hunger Wave is On a Huge Curve After Four Weeks of the Work Shutdown - World-Central-Kitchen to set up Pop-up Free Farmers Market at Masbia Soup Kitchen
WHEN: Monday, April 20, 2020, 2:00 PM - 7:00 PM
WHERE: Masbia of Flatbush, 1372 Coney Island Avenue, Brooklyn NY 11230
CONTACT: Alexander Rapaport, [email protected], 718-972-4446 x 301
TWITTER: @masbia
Photo Caption: Masbia’s Chef Ruben Diaz waving hand sanitizer and masks in front of Masbia of Flatbush with large pallets of Emergency Food such as kosher bread, chicken, vegetables, and juice are arriving to feed the needy. (Courtesy of Masbia)
Link to tweet with video: https://twitter.com/Masbia/status/1252074671530541057
Do you like this post?