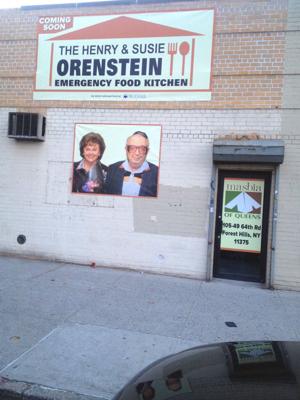 With development of a mixed-use structure imminent at the site, Masbia executive director Alexander Rapaport told the Chronicle

in January he was cautiously optimistic about finding a new location for the Rego Park soup kitchen.

On Wednesday, a relieved Rapaport announced Masbia had found a new spot to serve the needy in Central Queens at 105-49 64 Road in Forest Hills, a half-mile from its 98-08 Queens Blvd. location.

The demand for emergency food kept on doubling every year since the opening of the facility on Queens Boulevard in March of 2010 and it is projected to distribute over one million emergency meals in the form of hot dinners and emergency groceries this year alone, not including other Masbia facilities,” Rapaport said in an email to the Chronicle. “The new facility has 800 square feet at the storefront level and an additional 3,000 square feet of storage.”

He said renovation at the new location will take a few months and an opening date for the new facility has not been scheduled.

“In the meantime,” Rapaport said, “the landlord of the old facility has been accommodating, giving Masbia a right to stay for the time being.”