With your help Masbia served over 2 million meals to hungry men, women and children last year. Donate now to help Masbia continue filling the need and with your tax-deductible receipt, Masbia will include a collection of 50 Tzimmes recipes from all of us. 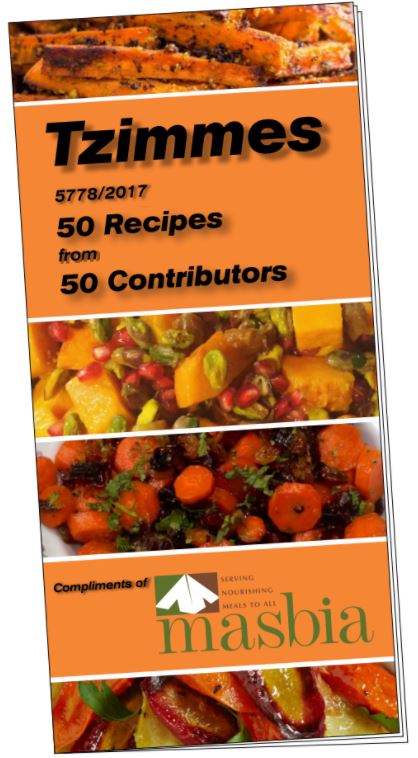 Every donation makes a difference. For $6 you can provide a meal to a hungry person at Masbia. Choose from the various options and multiples of six by clicking below. Every donation will help put food in an empty stomach. Start the New Year by helping Masbia feed everyone in need. Every donor gets a copy of 50 recipes straight from our chefs! Donate to reserve your copy today.

Shana Tova From All Of Us

CBS News reporting on our High Holiday distribution in 2012

A Note from Alex

Last Thursday morning, I was doing intake for our food pantry distribution, when a single mother, Sarah, became anxious that the line would take too long while her five children waited alone at home. Linda, a crossing guard, and a weekly volunteer with Masbia helped calm her down. She told the mother to send one of her children and Linda would make sure that the family received food.

A while later, a young boy with long blonde Payot arrived. Within two minutes, Linda figured out that this young boy, Shloimy, is Sarah's son. A family of six is eligible for 9 pounds of grains, 18 pounds of protein, and 27 pounds of vegetables; it was obvious to us that Shloimy would not be able to carry that home. Linda arranged for Raph, our site coordinator, to pack all the food into boxes and onto his hand truck. Raf walked Shloimy home with all of the food.

In the days before the High Holidays, as we are preparing for Judgement Day, or as otherwise described as the day we all stand in line anxiously awaiting judgment. While waiting on that line, Masbia can help you accumulate merits by donating charity to feed the needy and have an anxiety-free Rosh Hashana. Your donation will help provide 2 million meals a year.

While our pantry bag distribution that people like Sarah pick up from Masbia has grown drastically in the last couple of years, the sit-down restaurant style hot dinners that we have been serving for over 10 years is still going strong. Recently, one of our guests opened up to share his story with a journalist from Columbia University. Coney, the son of one of the biggest Rabbis in the past generation, worked in IT for 40 years until he was forced to take an early retirement due to outsourcing. He now survives on his retirement money and struggles to make ends meet. He finds it difficult to maintain his pride and dignity in a society that has rejected him. Eating at Masbia has made Coney feel like he is "treated like a human being" by being served in a dignified manner. Listen to the clip below to hear Coney's full story.

For More about the story on Coney, Click Here

Donate now and with your tax-deductible receipt, I will enclose a collection of 50 Tzimmes recipes from some of the best-known chefs in Kosher cooking. On Rosh Hashana, we eat Tzimmes to symbolize a prayer that more good merits should be upon us. To us at Masbia, Tzimmes has come to symbolize sharing with and feeding the needy, as it has become a long-time staple of emergency food. Now you can share some carrots with those in need by donating today, and turn your prayer into more than just a symbol.

Dozens of chefs are offering their recipes to you to encourage you to donate as much as you can. These chefs are really motivated to help raise money to feed the needy. Only with your help can Masbia continue to feed the hungry men, women, and children who walk through our doors every day. Your dollars will buy the carrots, chicken, fish, and much more that volunteers will use to stuff thousands of pantry bags for needy families, and that our chef will cook throughout the season.

Mail your donation today to ensure you get the Tzimmes booklet on time!

The History of Tzimmes

On Rosh Hashana, the Talmud instructs us to eat various symbolic foods, simanim, as omens for the new year, allowing us to express our desires for a sweet new year and to be inscribed in the book of life. While some traditional foods of the Rosh Hashana meal go back thousands of years, the tzimmes dish is one of the latest additions, made especially prominent after being cited by Rabbi Shlomo Ganzfried of Uzhhorod (also known as Ungvar), the author of the famous Kitzur Shulchan Aruch.

For Ashkenazi Jews, tzimmes, one of the many different symbolic foods that either taste sweet or have names that sound similar to our hopes and prayers for the new year, became a fondly remembered dish of the Rosh Hashana meal.

The special prayer recited along with the tzimmes, “sheyirbu zechiyoseinu,” may we have more merits, is based on the Yiddish/German word for carrots, “mayeren”, which can also mean plenty or “more” and comes from the Hebrew word “marbeh”. In modern day Israel, carrots also took on new symbolism, since the Hebrew word for carrot is “gezer” and the prayer “shyigzor aleinu gezeiros tovos”, that Hashem should issue us only good decrees, became incorporated into the Rosh Hashana meal.

This year we would like for your tzimmes, enhanced by this recipe collection, to symbolize more than just a prayer. While the prayer of the tzimmes is to have more merits, this year the tzimmes can symbolize actual accumulated abundance of merits earned by feeding the hungry, through a charitable donation to Masbia. 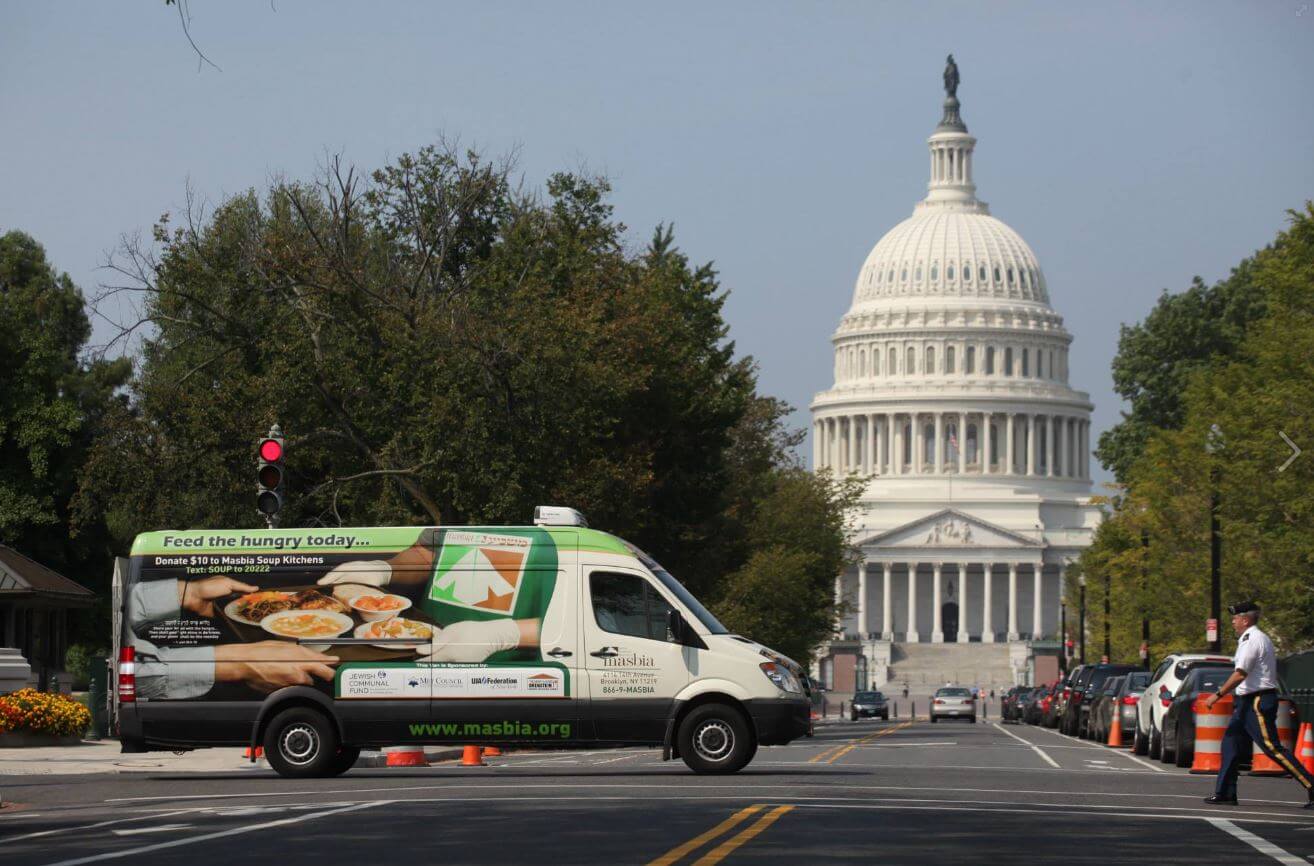 To us at Masbia, tzimmes has long been a symbol of emergency food. During Hurricane Sandy, Masbia joined the relief efforts by sending thousands of meals to disaster victims in the New York City area. Tzimmes was one of the ways in which we were able to provide nutritious food to our fellow New Yorkers. We literally filled every inch of oven space with carrots and let them slow-cook overnight, giving the chef a head start in the morning and enabling him to keep up with the unprecedented demand.

The following year in 2013, Masbia traveled to Washington together with anti-hunger activists to advocate against cutting SNAP (formerly known as the Food Stamp Program). There were $40 billion in cuts on the table, the greatest amount in decades, which if enacted would destroy the hunger safety net. Masbia’s chef and senior staff served tzimmes at the Capitol Building between Rosh Hashana and Yom Kippur, bringing our congressional representatives a special and sweet high holiday message through our post-Hurricane Sandy relief work. Tzimmes was the perfect food when Masbia went from serving its standard 500 meals a day to 3,000 and we wanted to illustrate how just like Hurricane Sandy brought disaster to thousands, the pending cuts to SNAP had the potential to become a government-created disaster that would require emergency food providers like Masbia to serve exponentially more meals.

In honor of Rosh Hashana, we asked various personalities in the food world to share their favorite tzimmes recipes with us. The responses ran the gamut and we present them to you here, exactly as they were presented to us by the authors, some of whom also included pictures and short descriptions.

Organizing 50 recipes of the same dish ended up being more complicated than anticipated and we chose to present them in alphabetical order based on the authors’ last names.

Tzimmes Tips from the Masbia Team

While cinnamon and carrots are a perfect combination, cinnamon can alter the color of your tzimmes. Try this tip from our own Chef: use cinnamon sticks instead of ground cinnamon to add flavor and preserve the beautiful orange color of your carrots.

While at Masbia we always use fresh ingredients, I would advise home cooks to use either canned or frozen carrots. Since the carrots in the tzimmes are so sentimental and the color and uniform size are so important to make a good presentation, this quick shortcut will actually improve your finished product.

Cookbook queen Susie Fishbein joined us with her family at the Masbia kitchens one year before Rosh Hashana, cooking up a massive quantity of tzimmes. She introduced us to the wonders of date honey, known as silan, which is the real biblical honey. With the Torah mentioning date honey as a symbol of prosperity, and dates being one of the simanim for Rosh Hashana also incorporating the kedusha of Eretz Yisroel into the dish, silan is the perfect sweetener for your Rosh Hashana tzimmes. 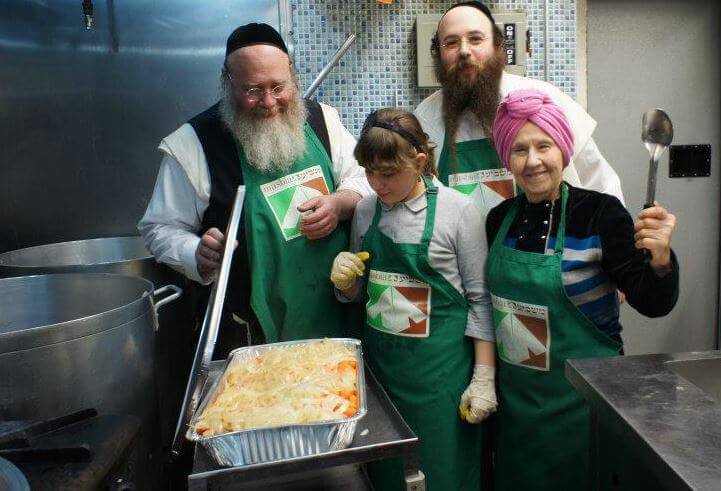 Alex's bubby always put kishka in her tzimmes, the perfect food to balance the sweetness of tzimmes.

Caramelized, minced onions are a fabulous addition to tzimmes, another tip from my Alex's bubby. With their golden sweetness, they can be used in place of some, or even all of the sugar or honey in your tzimmes.

After Hurricane Sandy decimated the greater New York area, we literally cooked around the clock, taking a break only for Shabbos. One week Alex's grandmother was visiting with us from Canada and as soon as Shabbos ended, four generations of Rapaports were back in the kitchen, preparing almost 1,000 pounds of tzimmes. One of the shelters we went to was housing hundreds of seniors, all sharing one large room, with minimal access to running water. The tzimmes filled the room with a heavenly aroma and everyone enjoyed a fresh, hot meal.

This year on the 13th of Sivan 5777, Alex's beloved bubby Miriam Leah a"h bas Dovid Hacohen hy"d passed away, may her memory be blessed.

We hope that this year your tzimmes will serve not only as a symbolic prayer for more merits but as a tangible reminder of your generosity of heart, as demonstrated by your charitable donation to Masbia in order to feed the needy and care for the poor.